195 of 195 countries. That caught my attention when my sister Arnina first told me about the Paris agreements.

So I started talking with people and reading articles. It took some days before I found anyone who talked about what to me was a revolutionary moment. Instead, the conversations and articles I found focused on whether what the countries of the world agreed to is enough or not. I, on the other hand, was looking to know and understand how all these countries managed to reach an agreement at all. I have no memory of ever before hearing of anything that all countries in the world could agree to about a topic of dramatic significance such as climate change. I am still piecing together this story, and have found, so far, only two useful articles. One appeared on Quartz, and the other on Rappler. 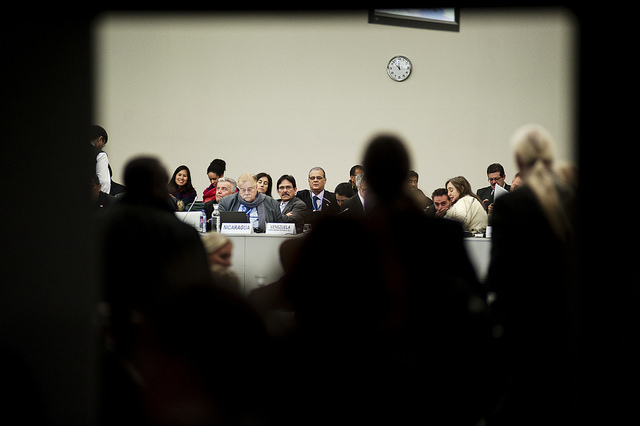 A peek at delegates in the COP21’s Indaba of Solutions. The night’s negotiations begin. It is almost midnight.

What I read only strengthened my initial heart-based hit that something extraordinary was going on, regardless of the specific results. Perhaps I am sensitized to such a focus because of the work that I do. Just recently I was involved in a much less dramatic though quite contentious issue, when I supported legislators and others in Minnesota in a project of collaborative lawmaking in the area of child custody. I both know how extremely difficult it is to bring people together, and also how transformative it is when successful.

Before continuing, I want to make it clear that in this piece, I am not addressing the details of the agreement itself. I am not an expert, and several people have already written extensive commentaries. The one I appreciated most so far is by John Sterman, and I invite interested readers who don’t yet have their own data or opinions about it to read it.

I am only focusing on what I see as an unprecedented event of enormous potential to address high-stakes conflicts anywhere. Here’s what I see as entirely new—assuming that this is, indeed, the first time for what I say below.

To read on, please visit the Metta Center’s site, for which this was written.  A bonus after Miki’s piece: additional thoughts by Michael Nagler, President of the Metta Center for Nonviolence.