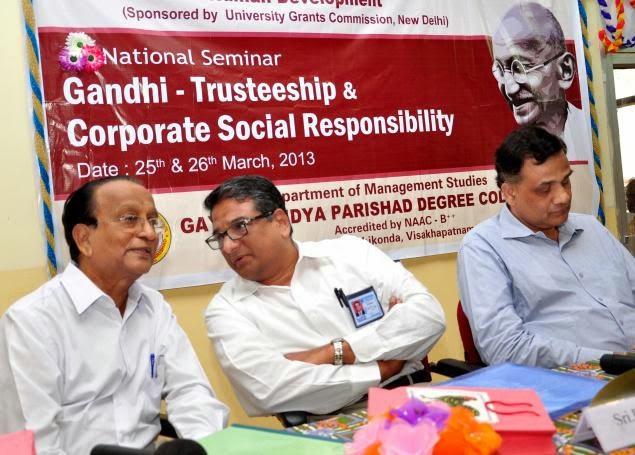 As much as I have read and heard about Gandhi for years, it is only recently that I have become acquainted with the complex vision he had of trusteeship. In essence, as I understand it, Gandhi proposed that anything material that goes beyond the elusive notion of need satisfaction (which I discussed last week) be viewed as held in trust for service.

In preparation for writing this piece, I had a long discussion with a friend, let’s call her Nadine, about the ramifications of what this approach could possibly mean. Nadine, a woman who lives in great simplicity, far beyond any I can claim, was talking about a computer she had acquired some time ago, and what it truly means to view herself as holding this computer in trust. At present, it seems straightforward: since she is using the computer almost exclusively for the purpose of supporting her service work in the world, she is at peace. What would happen, however, if she stops doing her work? Would trusteeship mean that she would be obliged to give her computer away to someone else who would use it for others’ benefit? Would she be able to part with it, to undo, within herself, the visceral sense that this computer is “hers”? That was the moment we both understood deeply that trusteeship calls into question one of the most sanctified pillars of a market economy: the institution of private property. Trusteeship means we don’t own anything; we consume what we need, and the rest is ours to use for the benefit of all.

We didn’t resolve this or anything else during the conversation. Nadine and I are both deeply committed to asking questions regardless of knowing the answers, leaving no stone unturned on the path to applying our values in our daily living, each of us in her own way. Once the topic of ownership arose, another story came forth from Nadine. A friend of hers, Carol for purpose of this piece, inherited a small amount of money, and decided to attend to this money as a trustee of it rather than owner. To honor this notion, Carol gathered a small group of friends to decide, together, she hoped, how to use this money most responsibly in the service of their shared vision and ideals. I was deeply inspired by this direction, and very touched by Carol’s choice. Alas, the other people in the group apparently didn’t find a way to free themselves sufficiently. Rather than engaging with Carol’s invitation in full, Nadine saw them essentially defer to Carol, unable to see themselves as full agents, or her as trustee, despite the explicit invitation and commitment to do so. The sense that Carol owned the money, deeply internalized in everyone, prevented them from joining her in holding the money in trust.

As we delved more deeply into the difference between ownership, which is enshrined in legal terms, and belonging, which is emotional and relational, I described to Nadine my latest discovery, about which I am still learning: the institution, idea, and practice of the commons. Please bear with me as I explain the background and details before returning to the concept of trusteeship.

The Wealth of the Commons 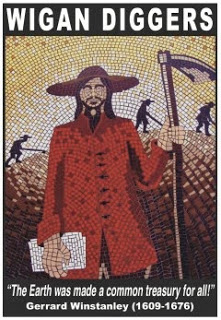 I acquired this discovery through reading the book The Wealth of the Commons. This massive edited collection, put together by the Commons Strategies Group, had a similar effect on me that reading Beyond Power by Marilyn French in the 1980s had: both of them exploded into the open clarity of my mind the reality that what we have is not all that’s possible. Something else is possible, because it once existed. In the case of the earlier book, it was the possibility of care and collaboration as organizing principles of human relationships and societies (clarity that deepened through reading The Chalice and the Blade by Riane Eisler). In the case of the book I just finished reading, the possibility is that of an entirely different relationship to nature and to resources more generally.

The clearest example and the one that helped me grasp the astounding losses we have endured in our world in the last several hundred years is our relationship to land. I had heard of land enclosures in the context of the massive upheavals that took place in England in the early decades of industrialization, though I now know I had understood little of what those struggles meant. 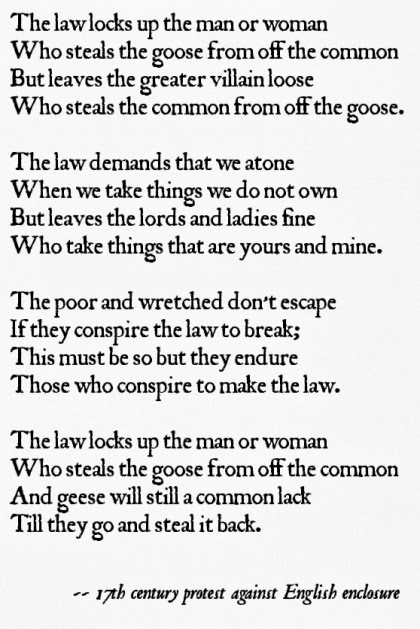 Although private property was already well established since antiquity, it encompassed only a minority of the land prior to capitalism. The majority of the land was not owned, the way it’s never been and still isn’t owned in indigenous cultures. Rather, the land belonged to people in exactly the kind of relationship that Gandhi envisioned, caring for it and using it without destroying it. Animal grazing, firewood collection, mushrooms, herbs, and many other fundamental necessities of life took place in land that was collectively governed by local groups of people. When industrialization accelerated, the state took possession of such lands, literally enclosing them and preventing access, and made them available to capitalists. The justification was always the absence of deeds or titles to the land, in blatant disregard of many centuries of accepted practice. The result was massive numbers of people who could no longer sustain themselves on the land, and had to adapt to working in the factories created on their former land. Since then, the progressive transfer of land to the hands of larger and larger entities – corporations, wealthy individuals, and states – has continued. In the last ten to fifteen years, a similar process is taking place all over Africa at astonishing speed, using the same logic and practices to transfer millions of hectares to new faraway owners.

It’s rare for me to cry while reading dense academic prose, and yet that happened to me when I started reading this book. Those were tears of grief, for the immense and mostly forgotten destruction of institutions that had worked well for centuries and for so many people, converting untold numbers of people from self-sufficient producers to unskilled laborers. Those were also tears of gratitude for discovering a new tool for making sense of these losses, and pointing a way forward into reclaiming the possibility of a relationship of mutuality and belonging with nature, life, and resources of all kinds. I experience both despair at the loss and hope at the ingenuity of people the world over who are reinventing new forms of the commons, both virtual (just think of Wikipedia) and physical, including groups of people that manage scarce resources collaboratively in various parts of the world. We have all been trained to believe, somehow, that the only alternative to runaway capitalism is central planning. What a wealth of possibilities opens up when we see that private property or state control are not the only two options for how we can come to govern ourselves and the resources of life well into the future.

I imagine by now anyone reading this can see the connection between the commons and the notion of trusteeship. As Nadine and I continued talking, we stumbled into understanding that overcoming the deeply ingrained legacy of private ownership and shifting into trusteeship individually was a very tall order. There’s simply too much temptation, too much habit, and too little that would support us in recognizing and shifting when we fall back into believing that what we have is ours to do with as we please.
Collectively held trusteeship, the very foundation of the commons, is an entirely different story. In clear contrast to the widely believed theoretical notion of “The Tragedy of the Commons”, the actual practice of a non-ownership relationship of a clearly defined group to a resource held as a commons maintains the resource better than when it’s held as private property. As amply documented in the book, when a group of people know that they are managing a resource for the benefit of the entire group, including their children and grandchildren, they spontaneously and collaboratively design complex and robust systems of governance, quotas, rules, and agreements about usage of the resource. As I was reading this book, moving from theory to historical analysis to complex descriptions of specific projects, I didn’t understand nor did I deeply bond with each and every piece I read. Some of them were even boring to me. Still, I read the entire book with an intensity of interest, as if I were drinking from a forbidden spring of water. I realize in this moment that the deepest ingredient of all in this mix was never mentioned in the book, and yet I am confident it is the foundation of all that is possible through this form of collective trusteeship: love. This love is one of the unifying principles of Gandhi’s work, and the missing ingredient in both capitalism and the modern science of economics. Beyond supply and demand, and certainly beyond the straw figure of the “rational” economic actor whose only concern is maximizing self-interest in the narrowest possible sense, there exists a deeper relationship of love: of self, of others, of nature, of life. It is this love that gives me the basis for hope that we can find our way to loving trusteeship, collective and individual, of all that’s needed for our own, and all other forms of life, to thrive.

Click here to read the Questions about this post, and to join us to discuss them on a conference call next Tuesday, October 15, 5:30-7 pm Pacific time. This is a way that you can connect with me and others who read this blog.We are asking for $30 to join the call, on a gift economy basis: so pay more or less (or nothing) as you are able and willing.

2 thoughts on “Gandhi, Trusteeship, and the Commons”

Human souls are irresistible. When we truly see another human soul, we can’t help but fall in love.