This post is the second in my May travelogue collection.

Some years ago, when the number of retreats and intensive trainings that I had led or co-led was well over 100, I stopped counting. Each one is its own unique configuration of purpose, players, relationships, content, context, location, and even food. I rarely write about any of them publicly in any detail. I am grateful that choosing to write about being on the road offers me an opportunity to share from the rich, challenging, and inspiring pool of experiences that together comprise the recent Mobilizing for Nonviolent Global Liberation retreat in Poland. 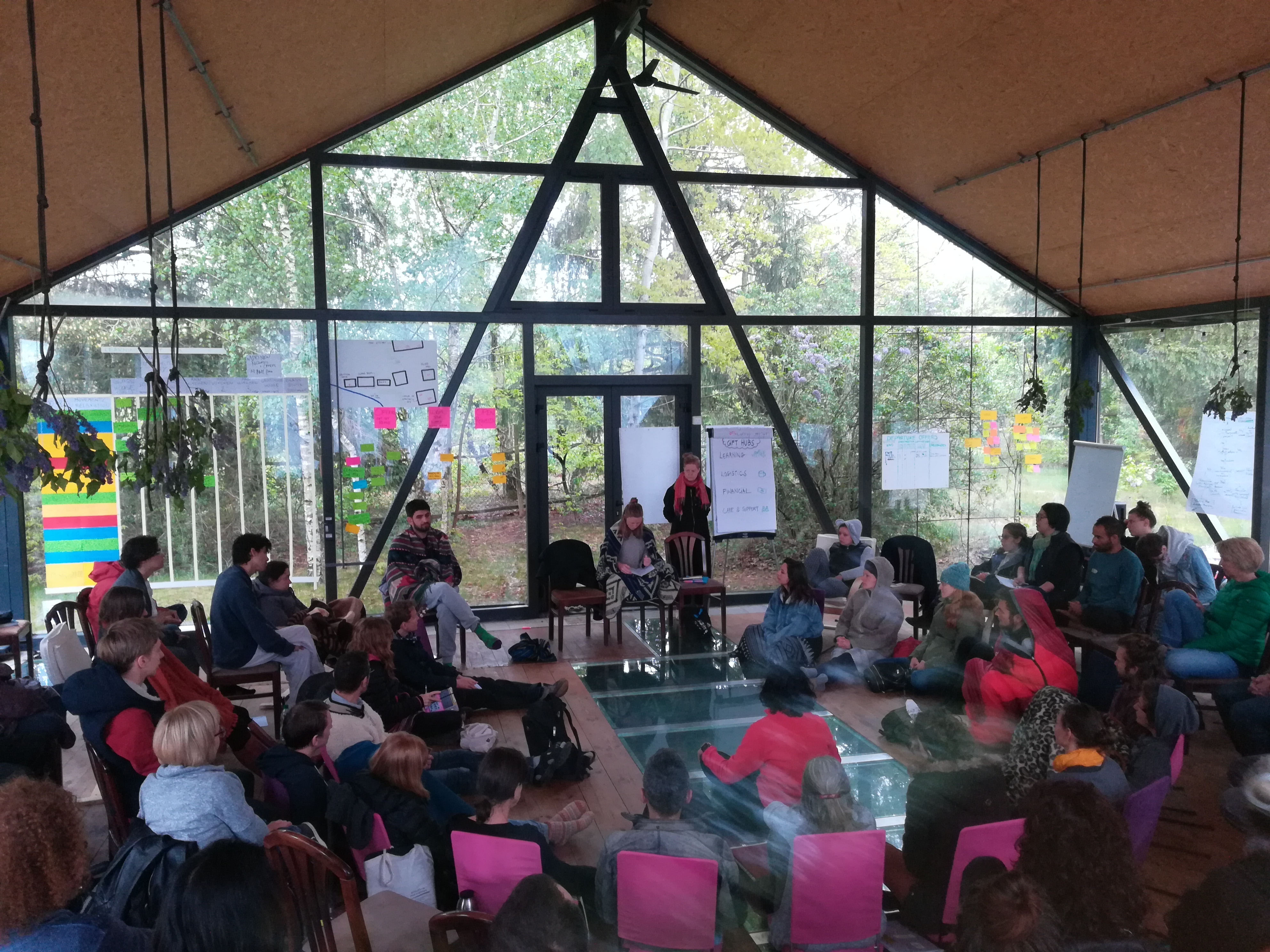 NGL (Nonviolent Global Liberation), the acronym some of us have come to experience as home, as oasis, as a glimpse into a future of possibilities, is a grand experiment. NGL operates as an online community that includes its own learning lab about how to function in flow and collaboration within a world that is mostly not functioning that way. The NGL online community also designs NGL retreats and supports local organizers in hosting them, as well as supporting individual members in their various and sundry projects. These are still very early days as we are grappling, in multiple settings and ways, with how we can attend to the inner and outer obstacles to establishing the community and projects in the way we long to. The challenge is daunting, and within it, we find many islands of great delight in the work and the ongoing evolution of what we do. So much so, that our passion and joy for the clear vision we see catapult us toward more and more experimentation even while our collective capacity lags behind. Where is the sweet spot that moves us ever forward while keeping us sufficiently together, is an ongoing question. This past retreat is one small chapter in this quest. What we learned, in some pain and some joy, may be of interest to others committed to prototyping the future they long to see.

Dimensions and Depth of Experimenting

At some point during this retreat, those of us who were holding it realized we were experimenting in four dimensions at once, and going quite deep in all of them.

In addition to these experiments, we also face, each time we come together, a reality that isn’t an experiment: the systemic lens we bring to our work makes more visible to us, all of us, the separations within which we live in terms of our place in the power map of the world. Any community or teacher who is even barely successful in managing to branch out of the primarily global north, middle class, and white pool of participants that is the norm in so many retreats, will need to attend to what this brings up. In this, as in our consciously chosen experiments, we face the same challenge: how to manage the gap between the vision we hold and the reality in which we live, both around us and within us, internalized? For many, this means coming to NGL retreats with more hope than other places, only to discover that we are, still, simply people aiming to recover from thousands of years of patriarchal training, and are rarely fully successful at it. In NGL retreats, as anywhere else, patterns of domination in all dimensions of social reality, continue to be deeply embedded in all we do. For some, the despair can be paradoxically even worse than elsewhere, where people come braced for these patterns to play out. For some, it means coming to NGL retreats to face, perhaps for the first time, the experience of those present who are most impacted by these patterns, which, in so many other places, is comfortably invisible to those not so impacted. For all, it means learning to find ever more togetherness as we face the realities that separate us, as we regularly fail in our attempts to do so, as we slowly gain capacity to do it better each time. Here, as with the experiments we chose, the gap remains large, and our responses worked for some and not others.

I don’t recall the last time I was so overwhelmed at a retreat as this time. Last year, in the same location with almost the same retreat team, it was a breeze for me: almost no conflict, clarity about what I was offering, which was mostly open-ended coaching sessions (my favorite these days), I was able to take breaks and immerse in the large pond that’s part of the venue, and I felt relaxed and in awe about what was unfolding. This time: several days of conflict all around, frequent reshuffling of what was happening, almost no coaching sessions, intense involvement in group process, late nights and long days, and long stretches of active agony interspersed with the moments of transcendent joy and deep meaning I have come to anticipate on any such retreat. My overall sense, beyond all these details, was that I was overstretched into holding responsibility while being underutilized in my contribution to the group. I never knew these two could coincide. No wonder I was suffering.

With all this, and with significant confusion and sometimes distress for participants, there was, nonetheless, a pervasive sense of togetherness and willingness to trust. I am moved, reflecting on this while writing, by the repeated rallying of the group, by the encouraging comments, the deep and honest conversations at the lunch table, the many celebrations, the detailed and ongoing feedback, and even the regular laughter. This was clearly a committed group. What held us together, I believe, is our collective grief over the state of the world, and our stubborn, unrelenting faith that we can do better and that it’s worth trying.

Towards the end of the retreat, a participant came to me to express his distress about what he experienced as my absence. It was then that I understood that we had simply gone too far in our experimentation by going deep into the radical end on four dimensions at once. I also realized that too much experimenting can lead to holes in holding which, then, can result in the phenomenon of responsibility “falling up” to whoever has structural power. At the same time, I was watching, day in and day out, while people facilitated and made choices that resulted in more group process than I would ever invite or support, while my hands were tied by agreement of passing power, as soon as possible, to others to lead and hold NGL, to move beyond me being indispensable. This is particularly ironic when the experimenting is specifically about shifting power relations: too much shifting, without enough clear holding for everything, can lead to more, rather than less power landing in the hands of leaders.

It was decidedly too late to make significant changes. I felt entirely stuck and helpless, without any image of what to do. At the lunch table, with 15 other people grappling with this reality, I continued to feel alone and without vision. The intensity within me was acute, and I invited mourning to wash over me. I let go completely and surrendered, without resistance, to the grief and the not knowing. For a long minute I wailed, fully, with the entire lunch table holding me in silence. Then a partial solution came: I proposed and all agreed that, from then on, I would offer coaching to whoever was facilitating the large group. I, and all with me, were amazed at the remarkable speed with which a new strategy arose once mourning was fully embraced.

Later, we shared the results with others, and offered new ways of framing what had happened. Slowly, over the course of the remaining time, the sense of togetherness deepened. By the time the retreat came to a close, a palpable sense of “we’re in it together, come what may” was present, at least from where I was standing. All experiments at transforming scarcity, separation, and powerlessness to flow, togetherness, and full choice are by necessity partial for as long as the world is where it is. And, still, we managed to digest and complete what we did, imperfect as it was. Love prevailed, somehow, in the end, coupled with a readiness to approach the next one, in California, in August, with more humility, more awareness of the challenges, and more capacity to name them in ways that foster togetherness than before.

After most people left, the retreat team and the few who remained embarked on a marathon 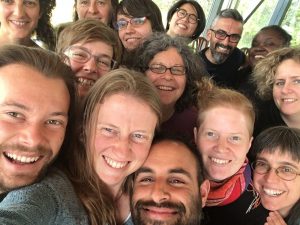 debrief meeting. You can see us in the picture, glowing in our love stored over days together. It went spectacularly well. I truly think it could not have been better. We figured out well whether and how to involve the additional folks so as to glean their wisdom without overwhelming our focus. We then went through the entire agenda of 30 items in 15 straight hours of work, including through all meals. For each item, we decided whether we needed to engage together as a whole group and how far towards a clear decision we needed to go before assigning it to an NGL Online team. We collected 46 pages of notes. Each item and sub-item was chewed on, brainstormed as needed, and passed on to someone. Every task that needed doing was taken on by someone, voluntarily, exactly as we aim within NGL. The principle of willingness prevailed for the whole day. We learned deeply that a group can only stretch into experimenting within its collective capacity, and that we had exceeded that. Such beauty in the joint willingness to look at our fallibility and accept it. We have three more NGL retreats coming this year, and new ones emerging next year in addition to repeats of this year’s retreats. NGL is not stopping. The human world and life are calling to us to give our all, in all the ways we know how, and more. Collectively, we are accepting the call.

INVITATION: To discuss this and other posts with me and other readers of this blog, check in to the free Fearless Heart Teleseminars. Next date: Monday, June 10, 5:30-7pm PT

One thought on “How Far Can We Go Together? Nonviolent Global Liberation Retreat, Poland”