The following is the beginning of an article I posted on Medium. It’s way too long for this site, and so I provide a link below it to continue reading if you are interested.

This article has been in the works consciously for at least three years, and, implicitly, since 1995, when I first heard Marshall Rosenberg speak of the protective use of force. Here’s one way he described it in a video interview: “The protective use of force is necessary when another person for whatever reason is not willing to communicate and meanwhile their actions are threatening our needs. So we need to take whatever action can be made to protect against that happening but we can do that without violence.” In that same interview he also said: “Use force to prevent violence.” 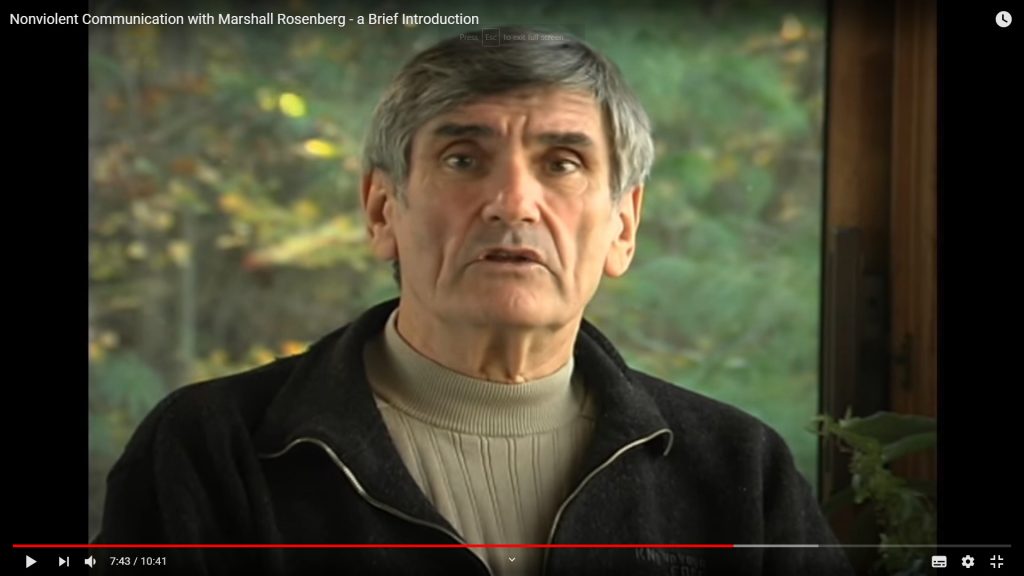 Image of an interview with Marshall Rosenberg

This description, as well as variations on it, including my own earlier attempt to create a list of criteria that I included in one of my books, raise more questions than answers: What do we actually mean by “use of force” and what counts as such? What makes it “necessary” to use force and how do we recognize that line? What does it mean to say that someone is not willing to communicate, and how do we assess the limits of dialogue? What else can we do to (re)create conditions for dialogue other than use force? What does it mean for an action to threaten our needs and how far can we trust our own reactions to be a reliable indicator of that? Are all needs, when they are seriously not attended to, cause enough to consider using force to rectify the situation? If not, which ones and why? What, if anything, can we look at to have any sense of solidity that our use of force indeed stays on this side of an elusive line on the other side of which lies outright violence?

I now have a template that I have derived after more thinking than I could track, more reading than I can reference, and more conversations than I can remember or give credit for. Suffice it to say that the template I have derived cannot in any way be thought of as mine alone. I see it as refining and making operational what Marshall’s words point to, a step in the direction of rigor, and a woefully incomplete one.

Use of force is consistent with nonviolence to the extent that we use the least amount of force possible, with the most love possible, aiming at (re)creating conditions for dialogue; that we make the choice using as much nonreactive discernment as possible, with as much support for the choice as possible, and while mourning not seeing another way to respond to a situation in which vital needs are at stake except to use force.

In the rest of this article I unpack each component of this template.

Photo Credits:
Screenshot of interview with Marshall Rosenberg, from: https://www.youtube.com/watch?v=DgaeHeIL39Y

One thought on “Is Nonviolent Use of Force an Oxymoron?”

In a separated world, I can attend to my needs or to your needs, not to both. In a chosen interdependent world, I can embrace both.