This month, I am in Europe, in six different places. I am planning to write bits and pieces about the different parts of my tour. Here is the first installment: 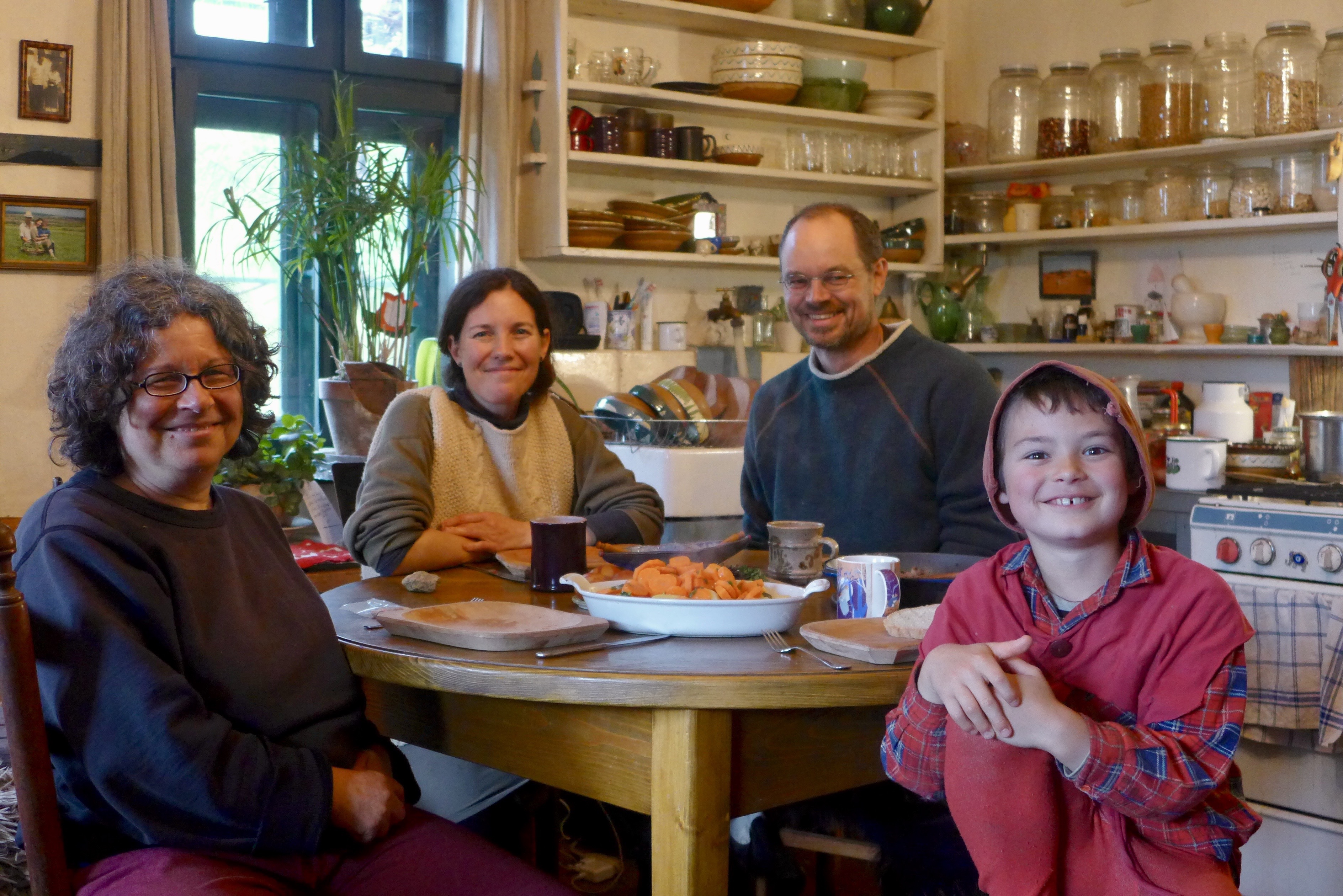 Robyn, Lars, Carsten and me in their kitchen

Robyn is from the US and Lars is from the Netherlands. Some ten years ago, life inexorably called them to join Alunisu, a village of about a hundred people in a remote location in Transylvania, Romania and to adopt the villlagers’ ways of living. Some months ago, when I discovered that I would have several days between the end of my long visit in Israel and Palestine and the beginning of my Nonviolent Global Liberation retreat in Poland, I chose to accept their invitation to visit this village of impoverished peasants in Transylvania. I say “impoverished peasants” instead of “poor farmers” advisedly. “Impoverished” highlights the politics of how “poverty” is manufactured by the ways that wealth is created and sustained. “Peasants” offers solidarity with people reclaiming the beauty and dignity of a way of life that has been maligned and assaulted in the transitions to capitalism, industrialization, and modernity. That older way of life, the way of the peasants, is about living in small communities, with very little cash money, and attending to basic needs directly in relationship with land and people. This set of relationships, which were the primary way of life of most people in Europe up until the transition to capitalism and industrialization, includes, centrally, areas of land that are not owned by anyone and yet belong to the entire community: the commons. This is what subsistence economy relies on and what we have lost: having resources that we care for together, with clear awareness of both the fragility and resilience of leaning on each other for our basic survival.

This visit gave me an opportunity to see, with my own eyes, aspects of how these relationships function in daily life. I also had the wrenching opportunity to be present for the ambiguous mix of choice and imposition that unsettle those relationships and in the process impoverish both people and land. The picture below is a condensed panorama of the village on the left and the open pasture lands extending beyond it on the right. Across the road on which we stood to take this picture is a fence, inside which is land bought and then taken out of such relationships, land to which the peasants no longer have access. One small patch of land at a time, the resilience and dignity of those living on the land are impaired. This, and government regulations, are the ways that the transition imposes itself. The semi-voluntary aspect of the transition is based in part on the villagers’ internalization of the disdain aimed at peasants, leading them to want to stop being peasants. Bit by bit they make their lives more and more dependent on cash while not having any new sources for cash. This leads to greater impoverishment.

Robyn and Lars came to this village because the land called to them. They have embraced this way of living as their own. They live with almost no running water, no flush toilets, growing and processing most of their food, and building relationships with the locals, who initially were very suspicious of their presence and intentions. In one conversation we had, about the commons, about wealth and poverty, and about capitalism, we wanted to distinguish what they are doing, what they have, from any familiar notion of wealth. And we came up with “living wealth” as what they have.

Over the course of ten years of living in this village they have witnessed transitions. One particularly significant one involves the common pasture lands in the picture above. A shepherd lives on them and tends to the sheep and the goats for all the villagers, sustained, collectively, by the villagers. Until just a few years ago, the shepherd would come in the morning to collect cows, take them to the pasture, and return them at the end of the day. As fewer people now have cows, the remaining ones no longer have collective capacity to sustain the shepherd in coming down to the village, and are now required to take their cows on their own. As Lars told me, the impact of this goes beyond the extra labor now on their shoulders. Prior to this transition, the villagers would all come out of their houses in the late afternoon to welcome their cows. This creates a rich informal network of relationships, or passing information vital to the implicit web of care and understanding that sustained their collective capacity to live on the land. Now, as each of the fewer people must take their own cow to the pastures, the relationships between people are also changed.

Robyn and Lars have joined local organizations that aim to support what is now called food sovereignty and prevent the growing dependence on the market, cash economy, that villagers in the entire region and beyond are falling into. Many in the village are in their 60s and 70s, and manage their lives through hard labor, relying on only eighty Euros (their monthly government pension) as their access to cash. Any step towards further need for cash, including for example the newly installed drainage and sewage lines that now shift one family after another into using flush toilets, deepens the impoverishment of the locals. Hardly any new, younger people join the village. Bit by bit, it will turn, like many other places, into a stratified social form, as those who manage to convert their homes to tourist attractions separate themselves from, even move away from, those who remain bound to the land, with less and less collective and hence individual capacity. 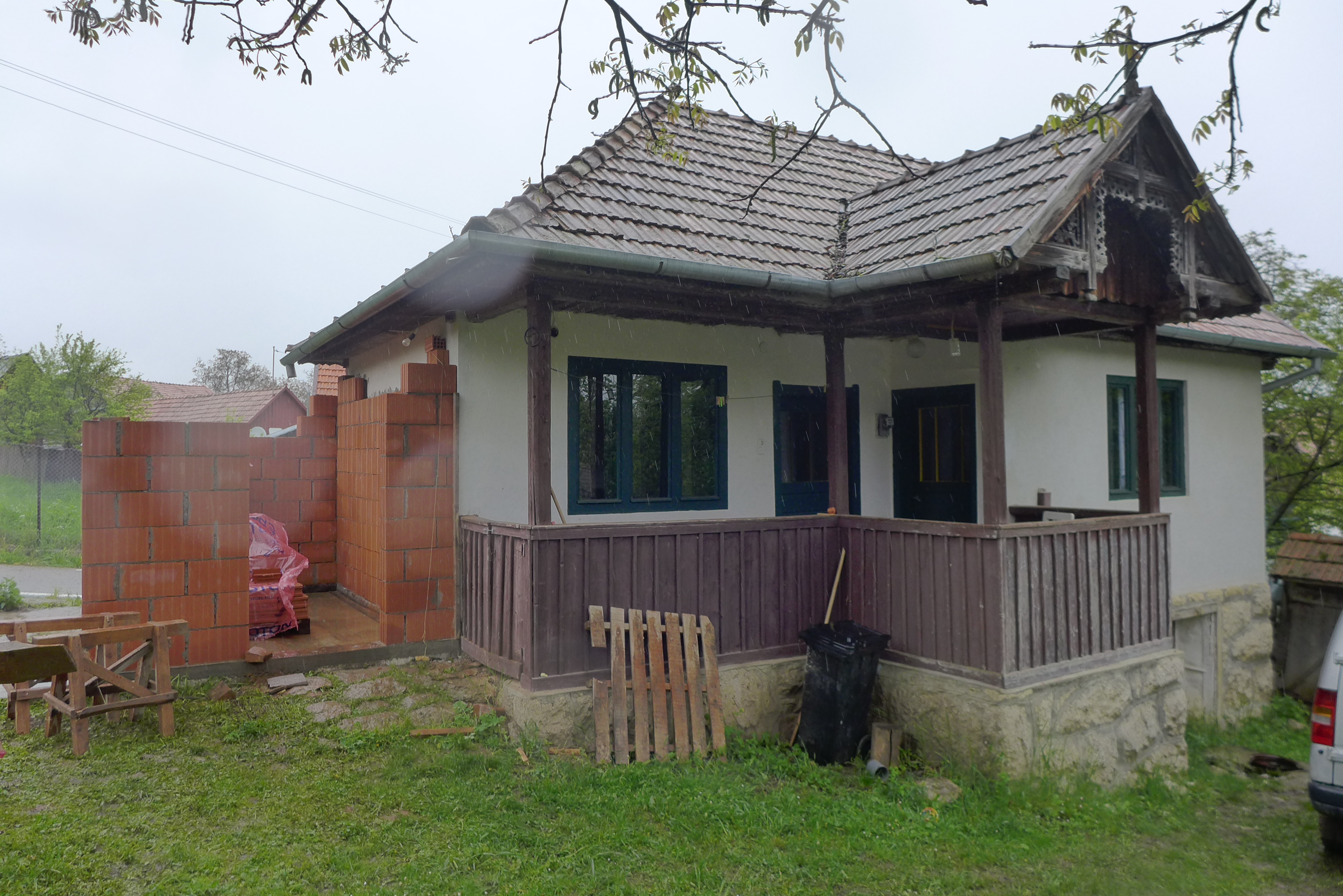 The house where I stayed

As to me, I found the conditions challenging. I am a city girl, and have been my entire life. Getting out of the house where I was staying and going to the outhouse in the dark rain is not my idea of a good time. Early May is the very end of the food preserves from the previous year, as the growing season just begins. I am used to variety in food, to being able to pick and choose what I eat. Here, the options are limited to what’s available from last year, fresh milk, whey for making soup and for drinking, cheese from the goats, and the few things that are already in season and edible. 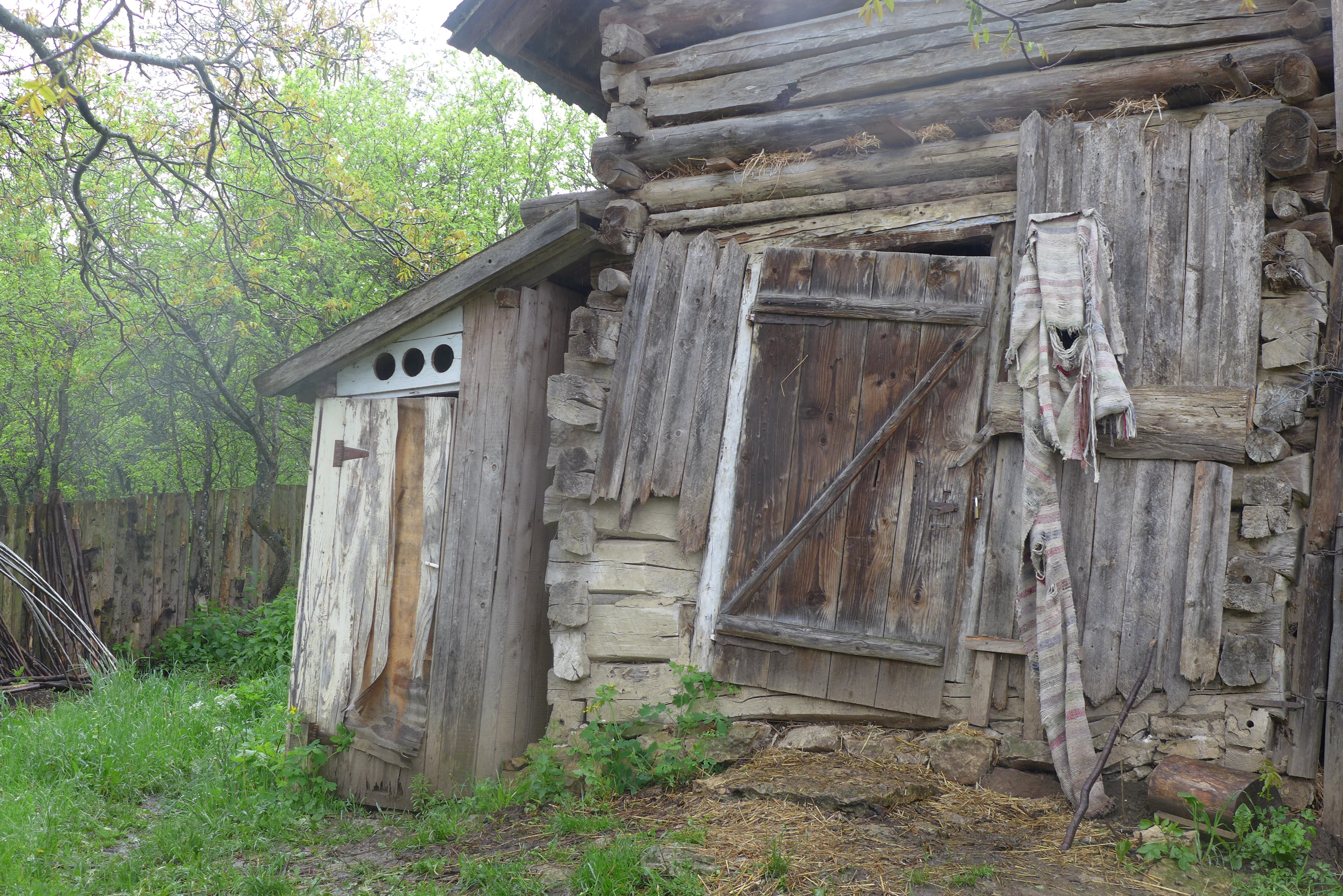 The daily routine includes milking the goats in the morning and taking them to the cemetery to eat grass in the afternoon. Being in the open lands with the shepherd is still a few weeks away so that the little ones in particular will not be stressed by the still cold air and rain. There is almost constant labor both in and out of the house. Robyn makes cheese all through the milking season, and does massive amounts of drying and canning in the harvest season. Lars tends to the animals and maintains the house and the land. Together, they manage endless other tasks. Simplicity rules. And in the midst of all the challenge, Lars and Robyn engage in two other main projects.

One is feeding, sustaining, and engaging with the third person they live with, seven-year old Carsten, their son and my current youngest and newest true friend. Robyn and Lars engage with him genuinely as a full person, and Carsten responds in kind. For one example, at some point we talked, all four of us, about how much inner strength he has, how he has remained connected with life, having no doubt in himself. He wanted to understand more of what it meant. I told him some stories about me as a child, about how I was criticized and undermined to such a degree that I lost my inner confidence. I then went back to him and asked if he got it, that I basically trust in his strength to do what is right for him even if others criticize him. He thought for a moment, and then nodded, agreed, and told a whole story about a time when he did just that. In detail. Utterly precise. He was part of most of our conversations, including one in which Lars asked for my thoughts about what they, as parents, could do to support Carsten’s capacity to remain connected to life within him and around him, so that he wouldn’t need, as an adult, to seek support to reconnect with life. I told them all that I have full confidence in him; that life has brought him whole; and that they don’t need to ever worry about him, only to nurture him. Being connected with life is what we are born for. Carsten is there, in body and spirit, regularly reflecting, with the adults surrounding him, on life, on relationships, on rich topics in conversations he takes an active part in. One evening he listened to a coaching call I had with Extinction Rebellion activists, in which I spoke at length and led people through activities about persistent judgments and what we in the Nonviolent Communication community refer to as “enemy images.” Fully attentive and curious, he immediately saw, afterwards, an application within his school, and how it could help him deal with some of the fights there. As the vast uncertainties of our world deepen, I take solace in the mystery of life still producing and nurturing new beings who are eager to live, enjoy, and contribute.

The other is the ongoing establishment of a learning environment to which people are already coming, volunteers to work the land, activists to engage in small conferences, and others to participate in focused learning events. Provision, the very small organization Robyn and Lars cofounded, is a tiny spot where care for the land, care for the people, and care for a nonviolent future come together. I had the difficult and lovely pleasure of staying there for a few days and to walk the land and the mountains. Mutual nurturing happened. Friendships flourished. Beauty surrounded us. A patch of life was lived together.

INVITATION: To discuss this and other posts with me and other readers of this blog, check in to the free Fearless Heart Teleseminars. Next date: Monday, June 10, 5:30-7pm PT