Last night I bought my first new car ever – a Fiat 500. I want to share some things I learned about how we approach buying and selling, and about human connection in general. 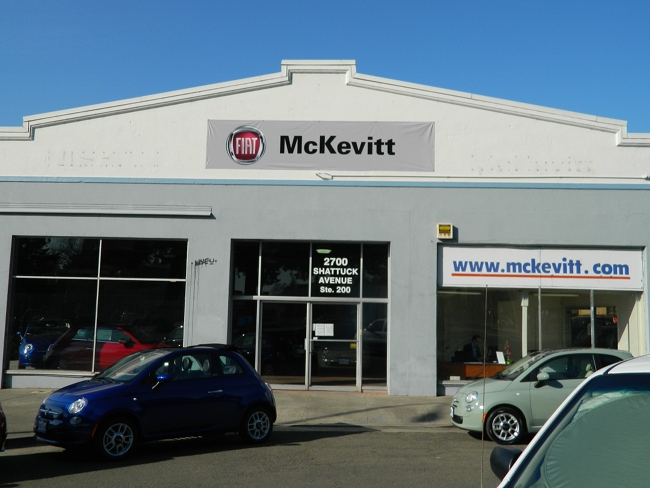 I went to one dealership (at right) to see if what I had in mind in terms of budget would actually get me a new car. I encountered an almost overly friendly car salesman. I was only mildly taken aback, virgin to the world of car sales. His numbers were higher than I could comfortably stretch into. Thankfully, I remembered a lesson I’ve been working on for so long – that I really never want to make decisions on my own; I want the support of others in my extended circle, always. I am so exhausted by the level of individual responsibility, I yearn for more and more recognition of and reliance on our human interconnectedness. So he gave me two days to consider: so far so good.

I wish I had brought a friend with me when I returned, because this time things didn’t go so well. Whereas before I clearly understood that there was lots of room for negotiation, suddenly there wasn’t, and he said I hadn’t heard him right previously. The whole interaction was back and forth with a manager I never got to engage with directly, the salesman taking long chunks of time where I just sat and waited while he talked with the manager, only to come back and say that I was being unreasonable and offering me essentially no wiggle room from the original offer.

Instead of just sighing and letting the experience go, I walked out of that place as if I had just eaten spiritual poison. I was agitated for hours, because I immediately situated what happened to me within the larger social context that makes it possible. We live an isolated individual experience, in which an extreme priority on money drives an overwhelming amount of our choices. This level of separation, mixed with the predominant sense of scarcity, so often leaves us susceptible to acting in our own self-interest to a degree that makes others disappear. That’s when we run the danger of cutting moral corners. I learned, again, how profoundly affected I am by all that happens to me, by all my interactions with and within the world.

At a friend’s advice, I called another dealership, much further away from me. This time I asked immediately to talk with the person who makes the decisions. The person got on the phone, listened to me say that I had a negative experience and I wanted a better deal, and was completely no-nonsense in his approach. There was no attempt at chumminess. He simply asked me all the details and the numbers, then got back to me within five minutes, as he promised, with a deal that was significantly better than the first dealer’s offer. When I thanked him for being to-the-point and not faking anything, he said: “I’ve been in the industry for 24 years. I can tell you that the training they give us only works to meet the needs of 50-60% of the customers.”

Without knowing me or seeing me, he agreed to keep his offer for two days and set the car aside until I found someone to come with me to complete the deal. Somehow, in all this, I solidified my understanding of something I’ve been teaching for a while. Paradoxically, although one of the foundations of the work I do is about human connection, I can now say in simple terms something I have sometimes struggled to find words for before: I want to aim for a level of connection that is congruent with the purpose at hand. Because this salesperson didn’t feign more connection than was relevant, I actually trusted him more.

Last night, I went with a friend to complete the deal, both so that I would have someone with me, and so that he could drive my old car back. Working out the deal was quite effortless, even though there was an initial mistake, and even though I discovered one more piece of information that had not been given to me by the previous dealership and therefore we switched back from leasing to purchasing. In the end, the sales manager, let’s call him James, offered me a deal that was better than what I asked for.

Once we agreed on the price, James started working on the astonishing amount of paperwork that had to be filled out for this transaction to be completed. He asked me, casually, what I do for a living. Perhaps having my friend there with me affected what happened, and perhaps it would have happened anyway. One never knows such things. I do know that I felt more able to be myself with him there, and that some magic happened, and it wasn’t about selling cars. When I explained to James that I work with people on communication and collaboration, he lit up and said: “I need that.” Knowing we had a bunch of time ahead of us, I offered to give him some tips.

James said that very often he was frustrated with people not doing what they were supposed to do even after he explained it to them carefully and clearly and they looked like they understood. What could he do to get them to understand, he wondered. I gave him a few tips. One was to break down what he was explaining into small chunks, to explain each piece and then ask the person to explain back what they would do with what he had explained to them. At this point, he said: “Really? Is it really this simple? I’ve read so much and I’ve never heard anything so simple.” That’s when I got a huge gift: I suddenly understood one reason why some of the time people are not as open to what I offer as I anticipate – they may be invested in the amount of effort they have put into learning something another way. The very simplicity can be overwhelming at times.

The second tip I gave him was that even when people understand what is expected of them, there is a wide spectrum of how much willingness they have to do the task or project. To begin with, I know that I always want people to do only what they are truly willing to do. For my own small staff, I told him, I strive to create a situation where if someone is really unhappy doing something, it will be given to someone else who is willing to do it, and that if someone is very much interested in doing something, it will be given to them. This takes care of the two edges of the spectrum, and for the rest there is usually willingness.

The third tip was about what to do when the thing still doesn’t get done. I tend to believe that means there is some obstacle along the way to getting it done. It was in this moment that one of the salespeople, whom I will call Andy, walked into the room, and from then on the interaction included him, complete with banter and affection. James was easily able to see how asking Andy what was in the way of getting the task done, if asked openly, would give him invaluable information. Such an interaction shifts him from being the bad guy that tells Andy what to do into someone who is there to coach and support Andy. Andy himself took great interest in what happened, and indirectly asked for what he could do to shift the challenging dynamics when they happened, whereupon I proposed to him that rather than telling his boss “I don’t know how to do this,” which tends to get James frustrated, thinking Andy should know already, Andy could tell James what his ideas were about how to get it done as far as he knew, and be specific about exactly where he got stuck and why, and ask James for directions for that part. Both of them loved it.

By this time, we of course had more connection than when I first called James and ran numbers with him, and it was clear, genuine, and organic. In addition, James and Andy got a piece of their own relationship to deepen, and some learning that may well help them do their job better by dint of collaborating more effectively. And I got a piece of my trust restored and more learning about how to engage, how to make things simple, and how to understand people ever more.

7 thoughts on “What I Learned while Buying a Car”