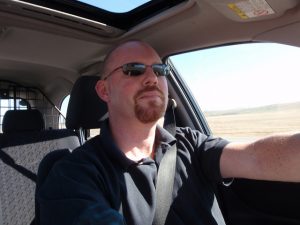 Guest post by Anna Barnett, communicator-and-outreacher for BayNVC and The Fearless Heart

How would your life change if you knew that your basic needs would be met no matter what? If earning money wasn’t necessary to keep a roof over your head and food in the fridge, what would be possible?

… let me stop right here for a sec. If this question gets your imagination churning, click here and write down whatever comes to mind. You’ll be entered, for free, into a raffle that me and my friends are setting up to give away a year’s guaranteed income to one random person. Then you can come back and read the rest of this.

Back? OK. So, this premise – that you could be taken care of regardless of what you’re doing – is part of the fictional world in Miki’s “Wisdom Tales from the Future,” where she imagines a society that’s organized around meeting human needs and doesn’t coerce anyone to play their part. Amazingly, the idea of meeting basic needs unconditionally has been getting more and more attention as a real-world policy proposal. You might have heard that Finland is making plans to pay every citizen a no-strings stipend. The name for this not-just-a-dream program is Universal Basic Income. 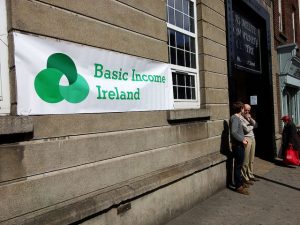 A lot of economic arguments have been made for basic income, and they come from a really wide range of worldviews (here’s an eloquent summary from a CNN columnist). Martin Luther King and Milton Friedman both called for it as a direct solution to poverty. Much of the recent buzz, especially among the technophiles here in the Bay Area, is about smart robots that will soon replace most people’s jobs, meaning there will have to be some other way for people to make a living.

What’s talked about far less – my sense is it’s almost taboo to go there – is just how wonderful it would feel, and how transformative it could be, if we all chose our work willingly. Miki’s Wisdom Tales are a rare exception in daring to think this out loud and taste the relief, the giddy freedom of it.

Actually, people talk about this all the time in basic income discussions, but it shows up as fear. Will freeloaders drag down the whole system? Why should my tax dollars pay for someone to play video games all day? Or what if they just waste the money they’re given? A couple months ago I attended a Basic Income Create-a-Thon, and one of the creative teams that formed there set themselves the task of listing out objections to be addressed. They summed up this strain of pessimism about humanity as “People will spend it on drugs, booze, and hookers!”

(Speaking of which, I talked to a sex-worker-activist the other day who was thrilled about how basic income could prevent exploitation of women. But leaving that aside…)

Why this is all about nonviolence

Assumptions about what people will do if we truly leave it up to them: these are the basis of violence and nonviolence. Violent, coercive social systems harm or threaten to harm people who don’t obey the rules or get a job, because of fear that letting people choose would unleash their innate selfishness, laziness, and destructiveness. The justifications we hear about why certain people should hold onto power, control, privilege, and wealth usually relate to this fear.

I would use the money to spend time with my children who live in another state.

I’m trying to be debt free by the end of next year, so this would definitely make that possible.

I would volunteer with the homeless population in my community and work on creating a sustainable garden to grow food for myself and my friends.

Start my own company.

Not be worried all the time.

I would travel more. I would hope more.

The sweet smell of hope, right? Nonviolence means trusting that these kinds of thoughts reflect the real you and the real us, that they come from an underappreciated core of human nature.  If you’ve experimented with Nonviolent Communication – or, for that matter, with unconditional giving and random acts of kindness – you may have glimpsed the incredible generosity, creativity, and sheer energy that can suddenly emerge from people. That’s what I thought of when I first read about basic income, in Charles Eisenstein’s Sacred Economics. Like NVC, guaranteed income is a way to affirm that everyone’s needs matter and encourage us all to make inspired choices based on full willingness.

Actually, even when I first encountered NVC this all rang familiar to me because of how I was raised. From age 11 I was an “unschooler,” a noncoercive approach that let me choose what to study and how to spend my time. I spent lots of it biking between three delightful volunteer jobs and various classes and projects with my homeschoolers’ collective. It’s easy for me to believe that basic income pilots in developing countries have ended up raising, not lowering, productivity. If you’ve also seen nonviolence really work, then I imagine you’re with me on this. 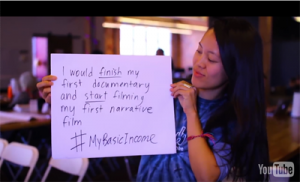 Screenshot from the My Basic Income Project

Now, I don’t actually know that a world based on willingness (or an employment system based on willingness) would work out beautifully. Miki wrote to me last week: “I have the fundamental faith that when everyone does what they have the talent, skill, availability, and willingness to do, it will be enough to make all that needs to happen happen.” I deeply believe this too. But I know only one way of actually confirming it: try it out.

This raffle I’m working on – it’s called the My Basic Income Project – is an experiment. We want to find out what happens for that one person who receives the gift of basic income. Plus, everyone who enters the free drawing is asked to share their dream. We want to spread all those stories, and get many more people thinking about what basic income would mean for them. This makes an abstract economic policy personal, and nurtures what we need most in the world: vision. 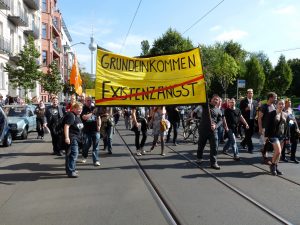 I’m positive it can work, too, because this raffle model comes from a super-successful project in Germany, Mein Grundeinkommen. They’ve funded 20 people and attracted hundreds of media stories and hundreds of thousands of participants. Their team came to the Create-a-Thon and inspired me and a few others to launch this the U.S.

And I could really use your help.

We are crowdfunding the raffle, and as of this writing we have $9,000 more to raise in seven days. So now is the time for this to catch fire. If you’re inspired and willing, please do two things right now:

First, go to the indiegogo page and donate whatever you can (every dollar counts, and so do total donor numbers).

Second (and even more important), tell some other people. Facebook, Twitter, email, watercooler, between chants at a protest march… whatever works. You can copy posts from my facebook. Go ahead, I really want you to! We are also planning a Thunderclap next week, which is the online equivalent of “on the count of three, everyone say MY BASIC INCOME!” EDIT: You can join right now, it’s super quick.

What I find absolutely delicious about basic income is that it’s so simple and so radical at the same time. Giving away free money is direct, potent, and somehow manages to fit in with wildly differing political ideals, from libertarian to socialist to anarchist. (I suspect this mirrors the way that money itself acts as a universal proxy for all needs.) And with money at the very heart of our social system, it’s hard to think of anything that would not be changed somehow by basic income – as I hope you can see just by running the My Basic Income thought experiment in your own head. How would it change you?

4 thoughts on “What if you didn’t have to work?”